Ghana’s Parliament is expected to resume on Tuesday, May 25, 2021 at 10 am for the commencement of its second meeting.

The resumption date for the commencement of the second meeting was contained in a statement dated May 10, 2021 and signed by the Clerk to Parliament, Cyril Kwabena Oteng Nsiah.

Portion of the statement read “Pursuant to Standing Order 32(2) of the Parliament of Ghana, I, Cyril Kwabena Oteng Nsiah, Clerk to Parliament, hereby notify Hon. Members that the Second Meeting of the First Session of the Eighth Parliament of the Fourth Republic shall commence on Tuesday, 25th May, 2021 at Ten O’Clock in the forenoon at Parliament House, Accra”.

According to the statement, the House is expected to reconvene so as to consider several bills and agreements after it had gone on recess on March 30, 2021.

Heavily expected to come before Parliament is the issue on vetting and approval of President Nana Addo Dankwa Akufo-Addo’s Deputy Ministerial nominees.

Another that is part of the agenda that Parliament is expected to sit over is the nine-Member adhoc committee which probing the circumstances that led to the collapse of UT and uniBank and other companies affected by the financial sector clean-up in 2017. The committee is expected to present its report before the House as directed by Speaker of Parliament, Alban Bagbin.

The House is also expected to consider a counter motion by 4 Majority MPs demanding a Parliamentary probe into electoral violence since 1993 and ethnic, gender, regional and other sectional backgrounds of persons recruited into the security forces since January 1993. 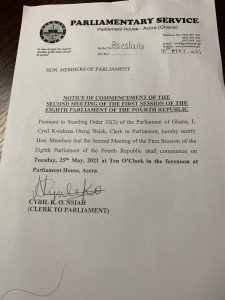 It Took Us 4 Hours To Stop Mills From Resigning – Prof. Ahwoi Reveals

Focus On Job Creation For The Youth – Economist To Gov’t