Photos taken during Op MANSIO 21, Training delivered by 1 Scots Spec-Inf to the Ghanaian Joint Special Forces Group over the course of 5 weeks. BRITISH ARMY DELIVER URBAN OPERATIONS TRAINING IN GHANA Over the past month, British troops have been helping to train Ghanaian soldiers to counter threats from violent extremist organisations. Soldiers from the British Army have been working with their Ghanaian Partner Force in Accra to deliver tactical and conceptual training in support of regional stability. This included troops from the Ghanaian Army’s 64th Infantry Bn and 69th Airborne Force, who currently provide a national security role in Ghana, and are looking to expand their capabilities as an expeditionary Task Force. A British Army Team Commander: “As a training team, our overall role within any region is partner-focused capacity building; to provide stability and protection against the emergence of future security threats. The aspiration is that by developing the skills, abilities and processes of one Partner Force, they will become a credible organisation through which capacity development can be passed on to neighbouring countries, having a greater overall effect within a particular region. Our relationship with the Partner Force is the keystone to our role; we must understand what they want us to do and why. Having that clear, empathetic approach and being personable gains trust, resulting in mission success. COVID-19 measures were carefully implemented to ensure that quality training could still take place within a safe environment. Face coverings were worn inside buildings and outside when individuals were within 2m of each other. Additionally, all training staff and exercising troops conducted COVID antigen tests at the start of each week prior to training. The 4-week training program focused on stability operations within an urban environment and included both tactical and conceptual components. Under the guidance of British Army mentors, the G

The Government of Ghana through the Ministry of Foreign Affairs and Regional Integration has reacted to a report by the UK Telegraph suggesting that Britain was set to deploy troops to Ghana, from its shut down operations in Mali.

The report as sighted by Plan B News indicted a recent visit by British ministers to Accra as being part of moves to hammer out the new security agreement “which will position Ghana and by extension Burkina Faso as the new frontline against terrorism.”

It continued in part: “It is unclear if the move is a face-saving operation in the wake of the mission in Mali being shut down or something more significant as British forces already train troops in Ghana.”

The Foreign Affairs Ministry’s November 22 statement, however, denied that there were any such plans.

“The Government of Ghana has no interactions with the UK Government aimed at deploying UK soldiers to Ghana for purposes of operations as described in the story.

“The Government of Ghana wishes to state that the information regarding British special forces is false,” the statement read in part.

Below is the full statement: 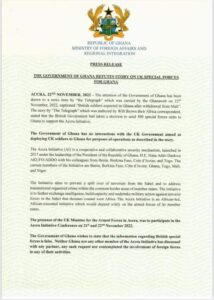 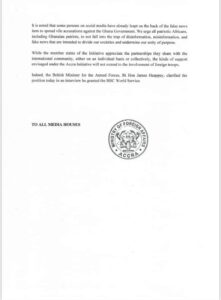 Minority initiates another motion for vote of censure against Health Minister

Spend wisely this Christmas, government may struggle to pay salaries in 2023 – Economist