Woman Dies After Fuel Tanker Veered Off Road, Landed On Her

A woman died on Friday after a fuel tanker veered off the road and fell on her.

The 5am incident according to Teso North sub-county police commander David Muange happened as a bus travelling from Nairobi to Kampala, Uganda stopped at the Koteko roadblock near Kocholya to allow passengers to disembark and ease themselves.

The fuel tanker is said to have veered off the road to avoid hitting the stationary bus that belongs to Grand Company from the rear end.

The woman killed was easing herself at the roadside at the time the incident happened.

The driver of the bus who had also disembarked to take a short call was hit by the tanker but managed to escape with minor injuries.

He was treated at the Kocholya Level Four Hospital and allowed to proceed with the journey to Uganda.

His co-driver took over the steering wheel after the incident.

The woman hit by the truck died on the spot.

Her body remained trapped under the fuel tanker until 2:56pm when a crane finally lifted the tanker to allow the removal of the Ugandan lady’s body.

Officers from Malaba and Amagoro police stations led by Malaba OCS George Ouka camped at the scene until the body was removed.

The officers, by the time the Star filed this story, were still at the scene to prevent members of the public from syphoning the diesel fuel that had remained in the fuel tanker. 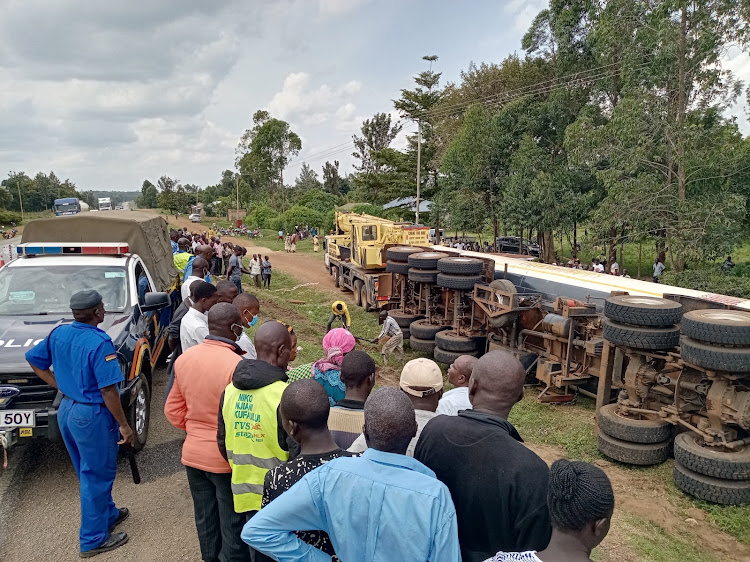 DEADLY END: The fuel tanker that veered of the road, hit and killed a woman on the spot on June 24, 2022.
Image: EMOJONG OSERE

The deceased was on her way to Mbale Uganda from Kenya when she met her death, sources at the scene said.

There was a sombre mood at the incident scene as members of the public tried to get a glimpse of the body as police removed the lady’s remains under the fuel tanker.

The accident happened approximately nine kilometres from Malaba border along the Malaba-Bungoma highway.

“We have managed to remove the body. It was challenging because the tanker was full of fuel making the process of removing the body hard,” Muange aid.

He said the team at the scene had to empty the fuel tanker before the wreckage of the fuel transporter was lifted to facilitate the removal of the body.

The body of the deceased was taken to the Kochoya Level Four Hospital Mortuary awaiting transportation to Uganda.

The incident happened seven days after another woman died along the Malaba-Bungoma highway at the Ikapolok black spot as she tried to pick up a phone and a purse she had dropped on the road. 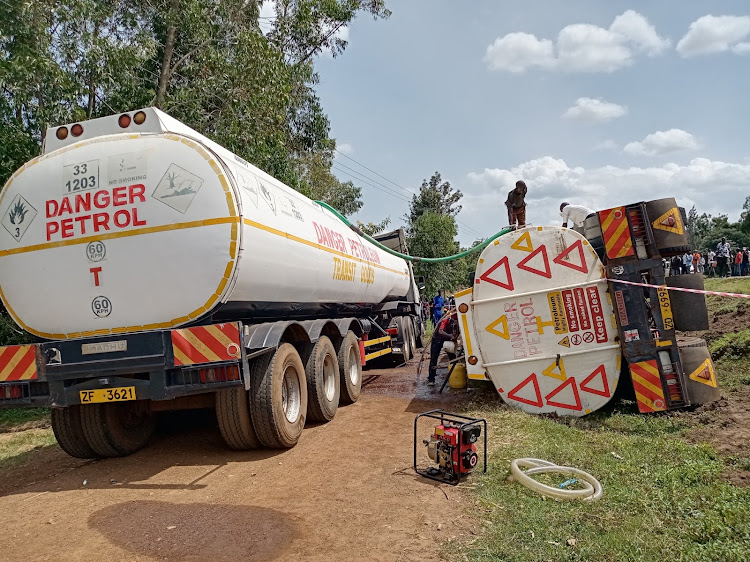 FINAL RESCUE: The incident happened seven days after another woman was hit and killed by a cargo truck along the Malaba-Bungoma highway.
Image: EMOJONG OSERE

The lady was hit by a cargo truck and died on the spot.

The boda boda rider who was ferrying the lady escaped unhurt.

Muange urged road users to remain vigilant and adhere to traffic rules to limit accidents along the busy Malaba-Bungoma highways and other major roads in the sub-county.