UG management debunk claims that some students are stranded

The Management of the University of Ghana has debunked claims that some students, particularly former residents of Commonwealth Hall have been stranded on its campus following the implementation of the new accommodation policy.

In a press statement sighted hub Plan B News the management said that the purported students who claimed to be stranded on its campus are individuals who have been hired to attract media attention to paint the institution black to the populace.

The statement furthered that one of such persons, being used to attract media attention has been arrested by the university security and upon interrogation, he has confirmed being lured to pose as a stranded student of the institution.

“One of such persons, being used to attract media attention, was arrested by the university security and has confessed to living in commonwealth hall illegally last academic year. He confirmed that he was lured to pose as a stranded student and slept in front of the commonwealth hall during the night of Monday, January 16, 2023, to gain media attention. he has been handed over to the police for further investigations,” part of the statement read.

The statement added that all former legal residents of Commonwealth Hall and male students of Mensah Sarbah Hall have been assigned rooms at UGEL halls on its campus. 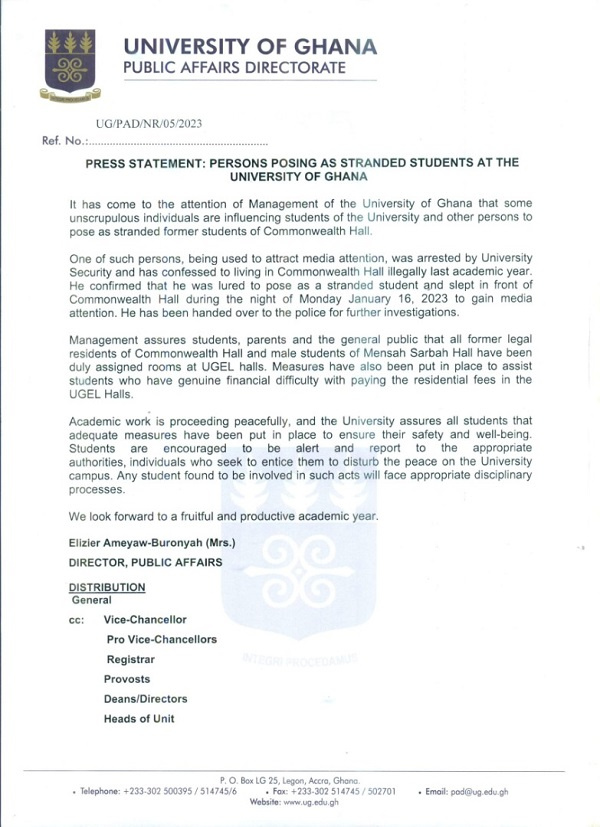 2022 CHAN: Ghana to play Cameroon or Niger in the quarter-finals