Council Of State Not Fit-For-Purpose – Kufuor

FORMER PRESIDENT John Agyekum Kufuor has described the Office of the Council of State as ‘not fit-for-purpose’ considering the development trajectory of the Ghanaian society particularly, its quest to deepen democracy.

According to him, the country should create a Second Chamber, as practised in other jurisdictions, and should comprise of diverse groups of individuals with diverse experiences, to help stabilise the nation for progress.

For instance, he said even though there may be situations in Parliament where the Majority may carry the day, they may not be informed enough to influence policy and its implementation in ways that would contribute to the enlightened development of the country.

The former President revealed this during an interview with Rt. Hon. Prof. Mike Oquaye as part of the Institute of Economic Affairs (IEA) series of dialogues organised by the Prof. Aaron Mike Oquaye Centre for Constitutional Studies at his Peduase residence.

He said, “The time has come for a Second Chamber. The days of the Council of State should be over. It might be a bit costly but it will help in the development of the nation. It should be an open system respecting democracy and shaping the Legislature as the Judiciary.”

The former President proposed that the Second Chamber should be composed of members of academia, industrialists, representatives of the House of Chiefs, professionals in their chosen careers, politicians, representatives of all the three organs of government, and individuals who have the nation at heart, to debate on various national issues in the full glare of the public. 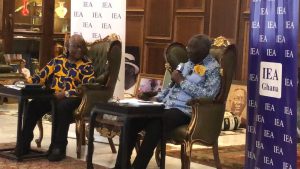 He mentioned that a Second Chamber, if utilised effectively, would go a long way to expose pitfalls in policies especially, in cases where the First Chamber, referred to in Ghana as Parliament, passes a certificate of emergency, or other pressing bills.

“A Second Chamber will vet to bring objectivity, due diligence on issues dispassionately, independent of the democratic processes of selecting incoming Presidents to help in the continuity of good governance. The idea or concept should be embedded in good governance,” he added.

Former President Kufuor further stated that the constitutional provision where Presidents appointed majority of their ministers from Parliament should be scrapped in order for the countervailing provisions of checks and balances required to be effective to reflect the state of the country’s development.

He stated, “Presidents appointing 70 per cent of ministers from Parliament must stop. Government must not appoint MMDCEs. Democracy should really begin from the grassroots and so the President should not have the privilege to do that. We must practise checks and balances in its pure form so that, they can play watchdogs over the Executive.”

The former President said that a country like Ghana, which was endowed with human resources and material wealth across the globe, should harness its resources particularly, to empower institutions and not strong men.

In attendance was the EC chair, Jean Mensa and her Deputies, Commissioner of  CHRAJ  Josephine Nkrumah, former Commissioner, Emile Short, Member of the Council of State, Sam Okudzeto, some representatives from the political parties and other notable individuals from both academia and industry.

Spend wisely this Christmas, government may struggle to pay salaries in 2023 – Economist