Eight police officers were killed during violent anti-government protests in Sierra Leone on Wednesday, the country’s youth minister told CNN Thursday, while hospital sources told Reuters that at least 21 civilians were killed in different locations in the country.

The officers, six men and two women, were “brutalized” and killed in the area where the protests held on Wednesday, youth minister Mohamed Orman Bangura said.
Hundreds of protesters took to the streets of the capital Freetown on Wednesday, protesting inflation and the rising cost of living in the West African country.
The protests grew violent at times. Graphic images and video of battered and seriously injured protesters and some members of security forces could be seen on social media. Security forces were also seen firing guns at citizens.
Bangura said he could not immediately confirm the number of civilians killed or injured in the violent demonstrations.
“We are yet to know how many people were injured, but I can confirm that eight police officers were killed.”
According to Reuters, at least 21 civilians were killed at different locations in the country. It reported that 13 people were shot dead in Freetown, and another eight were killed in Kamakwie and Makeni towns, citing hospital sources.
Vice President Mohamed Juldeh Jalloh imposed a curfew Wednesday to quell the protests.
Youth minister Bangura described the protests as an “act of terrorism.”
“Those are not protesters. There’s a difference between protest and riot and acts of terrorism. Protesting is different from acting as a terrorist…going against the state, killing young police officers,” he said. 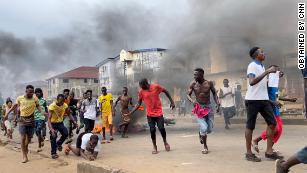 Curfew declared in Sierra Leone’s capital Freetown amid violent anti-government protests
“The police have made some arrests,” the minister told CNN while accusing the country’s opposition of financing the protests.
“This was well planned, calculated and financed by members of the opposition All People’s Congress. Members of the opposition paid young people to come to the street to take over governance,” Bangura, a member of the ruling Sierra Leone People’s Party said.
“If the protest is as a result of the cost of living, why is it not happening in all the strongholds of the current government? Why is it in Makeni that happens to be the headquarter town of the opposition? Why is it not a nationwide strike? Out of 16 districts, why is it only in three districts that they (the opposition) think is their stronghold?” he asked.

I am deeply disturbed by the images of violence going in #Freetown this morning. I am calling on the #SecurityForces and all #Freetonians to be peaceful in our interactions! We can overcome our challenges with #Peace!!

CNN has reached out to the opposition party APC for comment, but is yet to hear back.
However, Freetown Mayor Yvonne Aki-Sawyerr, who is one of the leading politicians in the main opposition APC party, has denounced the violence.
In an emotional video released Wednesday, Aki Sawyerr pleaded for an end to the violence and said: “This is not about party but about people.”
The mayor added that she had been praying for peace and national unity in Sierra Leone alongside the steering committee of religious leaders.
“Today in our city… my heart goes out to all who lost their lives and loved ones… the ones who lost property right across the city. We all are brothers and sisters… I believe fully in peace and stand against violence,” she said, speaking in the local creole dialect.
Source: CNN

Uber Driver Drops Passengers Off At Airport, Returns To Rob Their Home